The Town Hall of Tarquinia 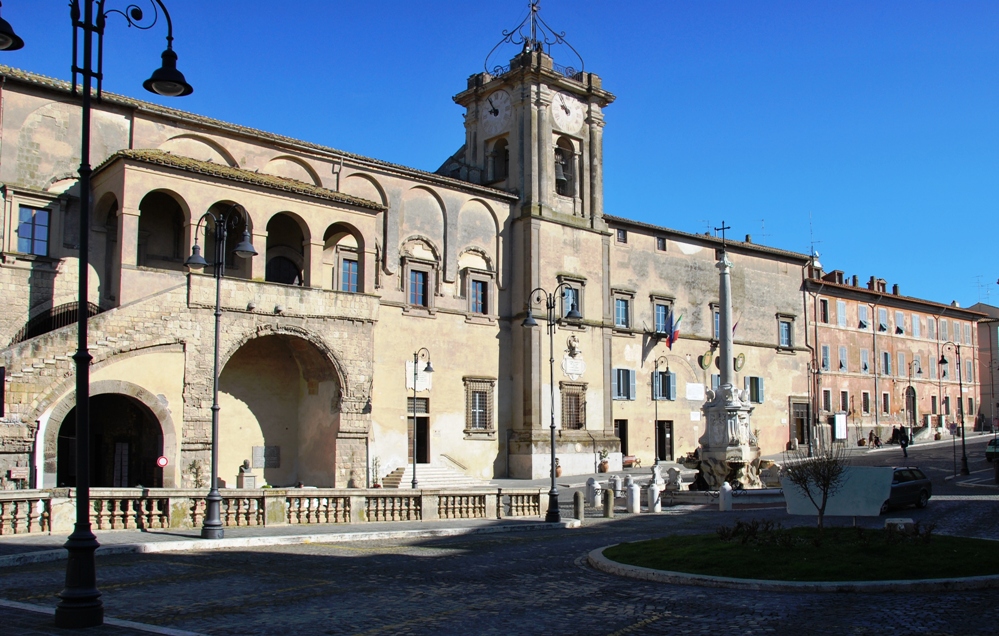 Romanesque style, with elements that prelude to the Gothic, was built in the thirteenth century on the route of the old city walls when it was expanded south to include urban centers built around compiessi monastic existing spread horizontally presenting at the back, in the Via San Pancrazio, a massive three-story body moved by a series of round arches, blind, resting on pillars.

The windows of the second floor were made as a result of radical renovation of the building in the sixteenth century, closing the existing mullioned windows with round arches of which traces remain in the masonry.

A large pointed arch that runs under the entire building connects Via San Pancrazio at the Town Square which faces the main front which, although structurally homogeneous, is actually made up of two adjacent buildings that, since the fourteenth century, are referred to as the Palazzo del Podesta, where dwelt the mayor with judicial powers and military Palazzo dei Priori, where resided the Gonfalonier, Captain of the Five Hundred and the consuls to whom it was the administrative power. As the rear, the main front has a series of round arches that once framed mullioned windows closed in the sixteenth century, replaced by windows. The lodge which has been known since the year 1366, was originally deprived of access stairs and outside of the cover: the staircase, set on two large arches, originally the sixth floor, was built in the fourteenth century, while the coverage has been documented since the mid-sixteenth century. The civic tower and the body of the building adjacent to it, to the north, is the main stage of this fresco interventiImmagine of the old council chamber made in the sixteenth century.

II main door of the building and to the far right of this. In the middle of the first flight of stairs there is a small cloister where once stood the water tank for use of the building.

The walls of the room, which opens at the end of the staircase, once used for assembly room are covered with frescoes dating back to the sixteenth and seventeenth centuries, with scenes and characters that relate to important episodes in the history Cornetana.

In the council chamber, which was used from the seventeenth century to the early 900 as a municipal theater, you see, high on the wall opposite the entrance, traces of a fresco depicting the Crucifixion, dating from the fourteenth century.

On the walls is placed a series of paintings by the famous Master Chilean Sebastian Matta and a fresco of the fifteenth century, from the Augustinian convent of San Marco.