All news, events and special Jubilee
You are here: Home \ History of Civitavecchia

Rutilio Namaziano in 416 on his return to Rome from Gaul describes the city in a joyful and live images, stops to outline the port and place: the port and the artificial island of Trajan, the twin towers guarding the two mouths, piers that serve as amphitheater, the perpetual calm of the port, up to the spa, three miles away, but easy access to the traveler, which remains uncertain whether there drinking warm waters or refresh them with the members. 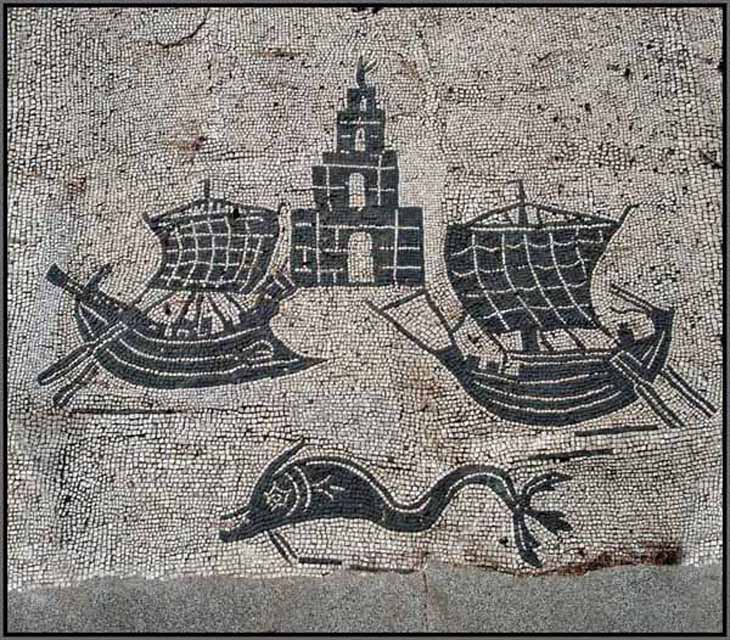 This is the true face of this city with a long history that begins in the Neolithic era, as attested by arrows and flint scrapers found in the area Pisciarelli, while the Bronze Age are the numerous prehistoric huts whose traces were found in the localities of Mattonara and Torre Chiaruccia; immediately after the territory was inhabited by the Etruscans as demonstrated by the two centers, of which we hear from Pliny the Elder and he calls Aquenses Taurini and Castronoviani, the location and the existence of the two cities has been definitely ascertained: the first on Ficoncella hill and the second at the brook Marangone, in the locality of the so-called Castellina, as evidenced by the remains of several Etruscan tombs.

Civitavecchia was inhabited by pre-Roman, as evidenced by a port of cell type that is formed by small basins each capable of giving shelter to a single ship and these numerous cells, dug into the shore, they called Centumcellae to this part of the coast; but the real development of the city we have with the emperor Trajan (98-117 AD), who built a new port to give the capital a stopover safe to cover-ups, as was that of Ostia, at that time the most important port and closer to Rome.
Trajan to hasten the work with his presence he built a magnificent villa, in place now called Casale Filippi, of which Pliny in 106 d. C. appreciates the beauty and the surrounding vegetation.

The port was built beautifully decorated with large porches in Doric style, with temples and statuary groups, had two stretches of water, one of which the innermost, still called Roman dock, served the commercial operations, and was enriched by a grand basilica and perhaps a temple dedicated to Mercury.

The port also had military purpose: there stanziavano departments of the two fleets of Misenum and Ravenna, as shown by the inscriptions of the graves of sailors, discovered at the beach of the Turkish Prato and now preserved in the Museum.

The territory from Rome to Civitavecchia became dotted with a succession of country villas and residences of large maritime, enriched large fishponds, intended otium of the powerful Roman families, of which there are anchors testimonials villas along the coast.

Refers to a mixture of legend and history, that Civitavecchiesi love to tell, that after a period of diaspora, during which citizens would wrong in the woods, Pope Leo IV had built for them a city after having a vision in a dream the place where he should arise.

15 August of 854, on a distant hill of the coast was born the city that was named in honor of the Pope, Lviv, that the people in memory of the lost homeland called, Cencelle, name that still preserves traditionally. States still the tradition that the population, in the space of a generation, began to divide the dilemma of whether to stay in this city on the hills or the sea and return to the old who joined together under an oak magistrates of the city, an old sailor, named Leandro, took the floor and spoke with such passion to encourage everyone to take the good advice to return to the “old Civitas” 889.

Lviv continued to survive for six more years, but the old city, whose historical continuity had been so traumatically interrupted, went back to live again in the rectangle of the old walls enclosing the first, second, third and fourth street and the main square ( … perhaps the only one), whose name is still that of the ancient mariner (Piazza Leandra).

Around 1000 was built the fortress “La Rocca”, the possession of which meant control of the port and the city was for a long time feud granted by the Pope, now to one, now another feudal lord, but the family that this was the most was that of Di Vico, which until the mid-1400s it had possession and that he later sold for 4000 gold florins. The city soon became a free commune, we have secure testimony from 1224, at the head of which there was a Viscount, who lasted in office for four months and was assisted in the administration of public money by the Camerlengo and two Councillors.

After years of painful abandonment by all powers, but not by marauders Pope Julius II in 1508 began the construction of the great fortress, designed by Bramante, Michelangelo completed in 1535 (or so says the tradition!) And that he was named. But another admirable work was built starting in 1515: the military architect Antonio da Sangallo the Younger traced the new fence urban (and this will keep evidence in the Uffizi).

The large enterprise, designed to protect the port from the ground, was set to continue until 1554, under Pope Julius III. In the same century coastal towers were built, they still know the name of the tower Chiaruccia, Valdaliga, Pygmy and Bertalda, to defend the land from the fearsome and notorious to Civitavecchiesi pirates, always present in the historical memory of our people.

The importance and usefulness of such fortifications, together with the establishment of a permanent fleet by Pope Sixtus V, became apparent on several occasions: both in 1535 when the Barbary pirates of Tunis, commanded by the famous Barbarossa, attempted to renew the invasions of the Saracens, both in 1556 when the Duke of Alba, the Spanish fleet commander, tried to enter the port they had fled the papal fleet of Paul IV.

In the following centuries were built the headlights of the mouth of the east and west before then, the port was enlarged and further fortified the city on the land side, was brought water from Allumiere, in 1660 was built the magnificent arsenal by Bernini to encourage the development of the port were granted exemptions, so anyone could trade any goods and in any amount, and the city developed to the point to become the provincial capital, comprising the territories of Corneto and Allumiere.

If during the fifteenth and seventeenth centuries, Civitavecchia had then regained its role as a port of Rome, however, the interest turned to the structures in the mirror of the sea in front was not matched by a corresponding interest in the beautification of the town; during these centuries, it is believed that all the civil, placed neatly on a few parallel lines, was a set of homes of fishermen and soldiers, a sort of garrison detached from Rome, as it had been in Trajan; will be during the next century that were built beautiful buildings around the Piazza Vittorio Emanuele present: the Women’s Hospital, the Conservatory of Orphan and Forno Grande, the church of Santa Maria prayer and Death, the beautiful fountain of Vanvitelli and the expansion of the fallen.

During the French Revolution, the energies of the State unfortunately had to be again concentrated in works of war. It reinforced the team, bringing to twenty ships, they increased the garrison and restored the walls, yet in 1798 the French troops occupied the city and from there embarked division of 6,000 men, under General Desaix went to Egypt to order of Napoleon.

During this year Civitavecchia tried to remain neutral, but on 1 February 1799 began that memorable (we still have the memories in our popular traditions) of the French siege lasted over a month, involving all citizens, who honorably defended the city, which was taken only after an intense bombardment. During the Napoleonic period the city was equipped with a Court and a Chamber of Commerce.

Civitavecchia returned to the popes, the city was enriched theater Trajan, palaces and Guglielmi Palomba.

Proclaimed the Roman Republic, Civitavecchia participated thrilled to patriotic movement, but on March 24, 1849, the General Oudinot managed to land due to the betrayal of the city authorities.

In the last period of the papal government was built by the Emperor Napoleon III, who intended it to defend the Papal States by the advance of the Italian State, the new wall on the east, the so-called French walls, the penitentiary and finally a railway between Rome and Civitavecchia, September 16, 1870 that was used by the troops of General Bixio to go to Rome to conquer Porta Pia and thereby complete the unification of the nation state.

Unfortunately during the second world war the city was bombed by the Americans, who spared neither historic public buildings, nor the civilian population and the sad memory of those tragic days of May 1943 is still alive in the memory of citizens more sensitive.

After the war began a rapid reconstruction that still has not stopped and has returned as a city today can see the tourist.

Today, Civitavecchia, the port of Rome, with its prime location and the center of a modern and efficient rail system, road and airport, linking the capital and the center of Italy with the rest of the world. It ‘also a strategic access to major tourist areas and major Italian Mediterranean cruise routes.

The Port of Civitavecchia, thanks to the new Port Master Plan has expanded commercial traffic reaching two million tonnes of cargo mass. It ‘also a strategic access to major tourist areas and major Italian Mediterranean cruise routes. The increase in passenger traffic was favored by a forward-looking policy that also saw the establishment in 1991 of the Coordination of the Middle Tyrrhenian which aims to strengthen the maritime cabotage (short sea shipping) between Civitavecchia and the ports of Sardinia (Olbia Golfo Aranci, Cagliari and Porto Torres).

Civitavecchia has emerged also as a stopover leader in cruise traffic. The works to upgrade the docks and facilities for the reception of passengers allowed to record an extraordinary increase of cruise ships, becoming the largest cruise port in the Mediterranean.