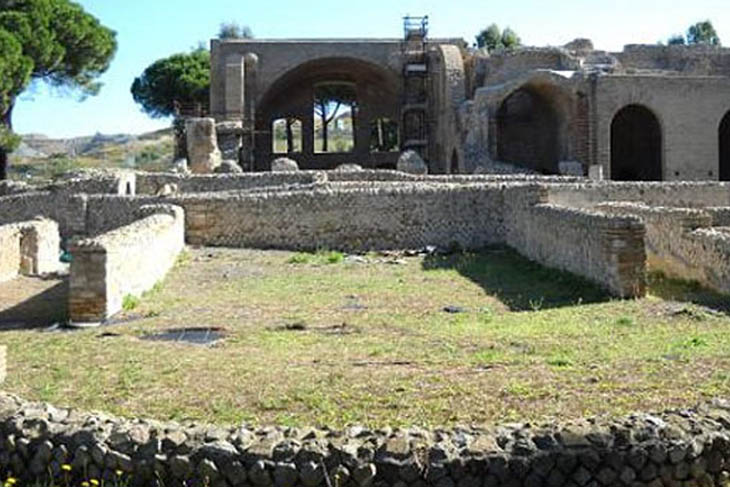 The Terme Taurine is a well-preserved Roman archaeological complex is located a short distance from Civitavecchia. Driving along the A12 exit at Civitavecchia north and turn left after a few hundred meters you can enjoy the splendid views of the Tyrrhenian Sea. The ancient baths are here, surrounded by a shady pine forest and not far from the tanks Ficoncella where it still gush hot spas where you can dive.

The entrance to the archaeological site is free of charge and you can a guided tour or go on your own along the way posted on site. The complex was probably Etruscan though not remain evidence of that. In the first century BC, in the middle of the Republican era, the Romans realized notable works in the area bounded in red on the map. The buildings of the Republican period were divided into two types, those for the bathrooms and the ones where they held meetings and other related activities such as massage therapy. The complex is entered through a rectangular peristylium to the left of which were placed small areas, such cubicula day where he was resting after a bath or practicing healing treatments.

Here are rekindled the beautiful floor mosaics. Near the cubicula there were two exedrae with a semicircular apse presumably equipped with seats and where visitors could sit and talk to the shelter of cold drafts. Then we arrive at the typical area of the baths, from tepidarium, the place where you acclimatava before entering the laconicum or sudatorium, circular and originally covered by a dome. Here the thermal water allowed to reach into the highest temperatures.

From laconicum, through a corridor, came first to a latrine, then two rooms that were to form the apodyterium or dressing room. Subsequently, each of the two rooms was created a bathtub, the largest of which, with mosaic floor, was in communication with the tank of the steam bath. This environment was bound to a warm bath and had a structure of a basilica, with two rows of columns dividing it into three aisles. The cover, in a first time to the roof, was replaced by a powerful time. Above it was made feasible a pavilion roof terrace with exquisite marble floor.

The caldarium was fed by the hot springs, conveyed through a lead pipe. The depth of the pool was about 1.20 meters. The whole environment was richly decorated marble facing, stucco figures with various subjects and Ionic capitals.

At the center of the great apse was converted into a rectangular niche, flanked by two brackets that supported the columns: lararium or kiosk, where he was exposed to the statue of the tutelary deity of the waters. Near the newsstand was found in the Luni marble altar dedicated to Alcibiades, a freedman of the emperor Hadrian, ministering to the nymphs of the waters.