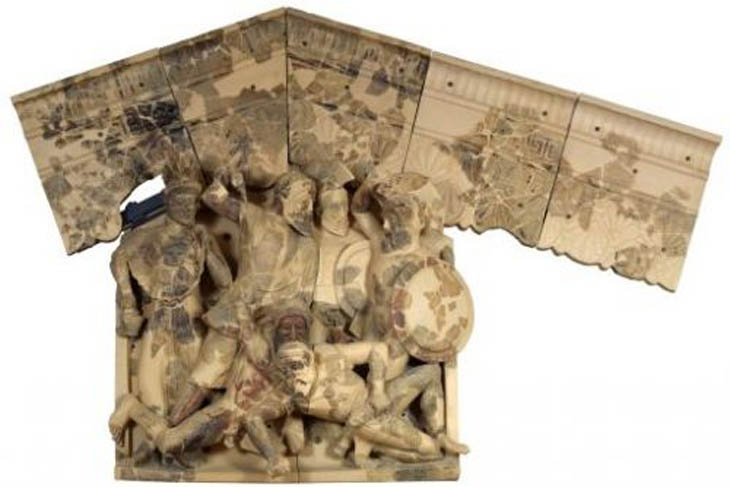 The city of Pyrgi was during the Etruscan and Roman one of the largest ports of the Tyrrhenian coast. Important finds have been found in recent excavations in the area of the sanctuary, which then made the area of the municipality of Santa Marinella particularly famous and important from an archaeological point of view

Pyrgi in the Greek version Pyrgoi (“towers”), was one of the three ports dell’etrusca Caere (now Cerveteri). The place was renowned throughout the Mediterranean world to the presence of the shrine dedicated to the deity female Leucotea-Ilizia, the Etruscan Uni, plundered by Dionysius of Syracuse in 384 BC The sacred area, extending for at least 6000 square meters, is located in the open plain, between the old town and the beach, surrounded by a temenos (sacred enclosure), which were brought to light the sides of the southeast and north-east, the latter presented the main entrance door to the sanctuary. The discovery of some antefixes female head of Ionic style, the presence of a church, unfortunately, not yet identified, and an attendance since at least the mid-sixth century BC attest that the sanctuary knew the moment of greatest splendor in 510 BC, the year that saw the start of massive construction projects, aiming to transform a depressed area in the largest and most prestigious sanctuary in Southern Etruria.

The excavations have revealed the presence of at least two temples equipped with a rich architectural decoration known as Temple A and Temple B and C defined as a sacred area, as well as a rectangular building divided into cells for the priestesses of the goddess that Servius recalls, citing Lucilius, be the famous “stock Pyrgensia”, namely “prostitutes Pyrgi”, leaned against the wall surrounding the sanctuary, with a propylaeum open access on the road Caere-Pyrgi, the monumental road dirt, over 10 m wide, that as early as the sixth century. B.C. linking the port of Pyrgi ancient Caere.

At the Temple was built in about 460 BC, adjacent to the existing B, with the same orientation but much more majestic. Presented a plant with three cells arranged parallel on the bottom and preceded by a colonnade between the extensions of the side walls, according to a typical scheme of Etruscan sacred buildings. The columns were made of plastered tuff and the capitals were peperino. Both short sides were decorated by an open pediment with reliefs, of which the most sumptuous and exceptional was certainly the rear, both for the composition of the scene that the technical processing and mounting plates on the heads of columen and mutuli (respectively the main and lateral longitudinal beams of the roof).

The episodes depicted are related to the saga of the Seven against Thebes, a choice that reveals from contracting a deep knowledge of greek myth and intense religiosity.

The temple called B, the first to be created, from the end of the century. VI. C., is of greek with a single long cell surrounded by four columns at the front and six on the lateral sides. The back porch, between the cell and the colonnade, is considerably narrower than the width of the side table.

The roof is covered with plain tiles and pantiles semicylindrical according to the system known as “Sicilian” had a rich polychrome decoration, as attested by numerous discoveries as well as two open pediments decorated with reliefs with subjects mostly related to the myth of Heracles.

The sacred area called C was originally a small independent sanctuary, with a cylindrical altar of gray tuff, a well and a second altar peperino. Behind it was built a fence to accommodate the gold plates inscribed, found during the recent excavations.

In 1984, a second area identified was the shrine’s inserted in a chronological horizon of the IV-II sec.aC

Become a maritime colony probably in the third century. BC Pyrgi kept the port function despite the turbulent political conditions of Etruria and the deadly spread of malaria in the years between 190 and 170 BC, and this function was also related to the activity of the numerous seaside villas metamorphosed in facilities for fish culture . We know that the site was still active at the time of the Emperor Trajan, but now as a landing place for boats of small cubic capacity, and most probably of Hadrian.

On the ruins of the Roman period was built the fortress of Castellum Sancte Severae, in medieval times, and after a series of events at the end of the fifteenth century, the castle became part of the Hospital of the Holy Spirit, until the early 1980, when it became the property of the City of Santa Marinella.