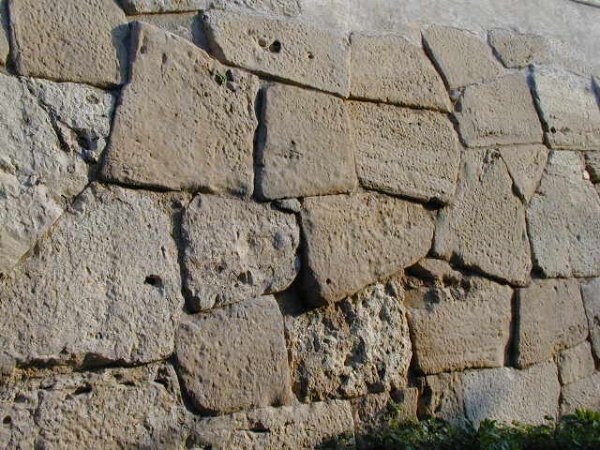 The presence of the circuit of polygonal walls emerging on the ground level and partially embedded in the structures perimeter of the renaissance village of Santa Severa, has directed since the seventeenth century scholars to recognize the site of Pyrgi in place of the Castle itself di Santa Severa. The problem of the dating of structures built in large polygonal blocks has always been committed to archaeologists, although many acknowledged a circuit very old, even due to a pre-Roman settlement, by the founders of the sacred sanctuary of Pyrgi.

After several hypotheses have occurred over the years, the archaeological map for the first time provides a diachronic view of the site, suggesting the relationship between the rectangle of the polygonal circuit, related to the maritime Roman colony (264 BC.) And the Etruscan settlement, more extended to the south. At that time, the knowledge of the circuit of the colony was limited at times quite extensive side east, north, south-east and north-west, and the position of the respective ports. As for the south-western part, toward the sea, seabed mapping conducted in 1974 had enabled him to record on paper the performance strongly oblique, at the southern corner, this response was combined with the presence of polyhedral blocks of cemented sandstone at the foot of the great wall that supports the Esplanade of Lords, re-used but useful in indicating the passage near the walls.

These elements allowed in 1985 to J.R. Brandt to present the first circuit on the performance of specific hypothetical reconstruction of polygonal and, in 1988, the identification of an additional stretch of wall, incorporated factories medieval and Renaissance castle in particular the premises of the Woodshed, by B. Frau, who thus further clarified the path.

The walls are of variable thickness, built of local sandstone boulders, and encompass a total area of 5.5 hectares large area, more than double that included the walls of the maritime colonies of Ostia and Minto, for example.

The remains of the marine side the most conspicuous and inspected are those directly accessible from the basement of the Woodshed, reached by a trap door. The diversification of construction techniques applied and the type of surface finishing, effectively illustrates the dual functionality of the city walls to the inside surface of the wall is left blank, taking upon himself behind the embankment to the outside surface of the wall, pulled lead, is smooth and compact, increasing the effectiveness of the defensive difference resulting.