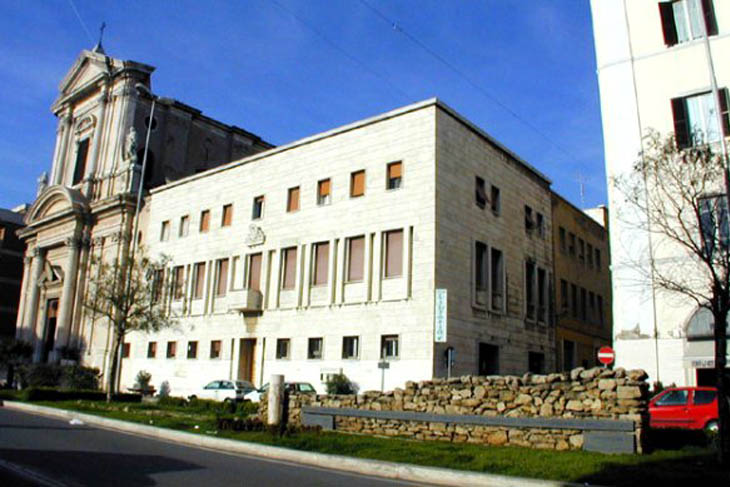 A dip in the medieval city and its stories. A journey into the past of one of the most important cities of the Papal States.

Going up from Piazza Vittorio Emanuele, from Via Piave you get to Piazza Leandra. Really striking is the oldest square in the city, especially at night lit by old lampposts; with his name reminds us of the old legend of the sailor Leandro, who said “the Great Council” (The crest of Civitavecchia recalls that memorable event with the oak tree on a blue background and the letters O and C), for which citizenship returned during the second half of the 800 from Lviv to live in Civita Vecchia. At the center of the square you can see the medieval fountain.

Tourists visiting this place can not help but get into the Church of Our Lady of Grace and Stella. Perhaps the oldest churches Civitavecchiesi, is the seat of the Confraternity of the Banner, founded in 1274 by St. Bonaventure; There are kept beautiful “Mysteries” that parade during the fascinating Friday Procession and depart from this church during this same procession penitents in chains. During the Second World War the church was badly damaged by bombing, which hit the city, destroying among other things, the archive with all its historical information, valuable for the whole city. The church, now restored, has regained its former taste, was beautifully painted in fresco by Ennio Galice.

Passing under the old medieval gate, low and deep that dell’Archetto, which still retains, on the mountain side, the epigraph dictated by Senator Calisse in 1889 for the millennium of Civitavecchia and reminiscent of the escape from the city to the fishermen the hills, where he founded in 854 Lviv (now Cencelle located about 12 Km), you reach Piazza Aurelio Saffi (or as they like to call it the Civitavecchiesi, Piazza San Giovanni), where you see a part of the ancient walls of the ninth century one of the four main towers at the four vertices of the quadrilateral enclosing the primitive city. Faced all’Archetto there is the seat of the diocesan Caritas, formerly St. John Church, hence the name populate the square, built in 1653, entirely at his own expense, by the illustrious Civitavecchia Terenzio Collemodi was the seat of the Knights of Malta, which resided there, as commanders of the papal galleys in Civitavecchia, until 1830. in the twentieth century the church was very neglected, partly because affected by the numerous and tragic bombing in 1943 and in recent years, deconsecrated, became the seat of the diocesan Caritas and of other charities.

Next to this last church is the Church of Prayer and Death: beautiful building built in 1685 with a Greek cross, decorated with a stylish elliptical dome, frescoes, a fine organ and stucco carvings of gild, is home to the Brotherhood of Death, which in the past had the privilege to release a convict on Easter Day, tradition still remembered during the Good Friday procession.

Continuing in Via D’Annunzio you can see on the left the ‘Old Hospital Civitavecchia (now restored is the seat of the Historical Archive of the city) and the old Infirmary garrison, built in 1500 by the Knights of Malta, to accommodate the crews of the galleys the sick and the local military garrison and after removal from Civitavecchia of the Knights, the first nucleus of the buildings that composed the old hospital, which was connected through the graceful bridge still visible on the left; now restored, is owned by the city for cultural activities, theatrical events and exhibitions.

At the end of Via D’Annunzio, we are turning left into Via Antonio da Sangallo, where we can admire what remains of the solid walls started in 1515 by the famous military architect Antonio da Sangallo completed in 1554 under Pope Julius III.

Arriving at the end of Via A. da Sangallo, turning to the left we find ourselves in via XVI in September (the name reminds us of the date of 1870, when the siege of citizenship surrendered Nino Bixio, who entered the city from liberator, turning then with his men to the siege and capture of Porta Pia in Rome will become the Italian XX Settembre: we can therefore say that Civitavecchia Italian became the first capital of the same !!), on the right we can see what remains of the Old Fortress and a ancient sentry box. Unfortunately there has been a lot of our ancient fortress after the furious bombardment of ’43, which brought many deaths and destruction, we can only remember that the origin was certainly medieval, was a quadrilateral robust, overlooking the sea and also from the side earth, even though he had no moat, could “take the breast to any attack,” as witnesses said the time, so that he could not prevail against Braccio di Montone, nor Nicholas Fortinbras, then famous soldiers of fortune, took refuge there in 1431 of Cola Rienzo, in 1502 there were guests Alexander VI and his son Cesare Borgia; during 1500 there was built next to the building that became the Apostolic Chamber and finally Palazzo del Podesta during the Fascist era.

On the left we can see Piazza Calamatta was once a beautiful place, full of gardens, where he loved to walk Youth Civitavecchia, now restored and is well lit, there stands the Old Hospital, which houses the restored historical and notary of the city.

Continuing on Corso Marconi, the street where you can stroll under the arcades in the days even less beautiful, full of elegant shops, you reach Piazza Vittorio Emanuele also called Cathedral Square, wide, overlooking the harbor, where stand the moles of Forte Michelangelo and the beautiful and fascinating cruise ships. On the left we can admire the Baroque cathedral dedicated to St. Francis of Assisi, built on the previous small church property of the Franciscan Friars in 1769 by Clement XIV, who entrusted the work to the then known, Francesco Navona.

The church still stands out for its simple elegance facade, decorated with Ionic columns, making it rich and valuable, is adorned by two large statues of St. Francis of Assisi and St. Anthony of Padua, while a wide and comfortable staircase fan stretches to accommodate the faithful, so that the square is dominated by the church itself. The interior is equally straightforward, simple and elegant: a single nave, enriched by a large triumphal arch, from which you enter the main altar where you can see two large columns, detached from the wall of the apse, which support a beautiful gable marble on which sit the statues of Justice and Hope; inside the altar itself dominates a large fresco of Antonio Nessi represented St. Francis on Verna; Also of considerable interest is a Nativity of Our Lord, painting attributed to the school of Dominichino of 1630. During World War II, the church resisted the bombing and luckily today stands solemn and well maintained alongside the modern seat of the Bishopric.