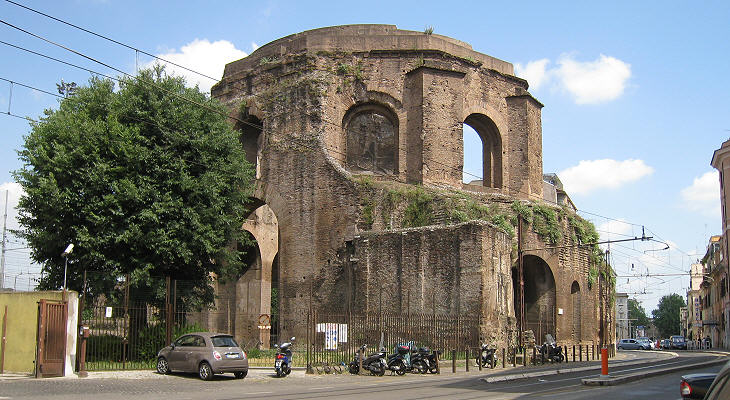 The only remaining evidence of the splendor of the villa is the Nymphaeum, the building now known as the Temple of Minerva Medica, but in the past also known as “The Galluzze,” probably to corruption Temple of Gaius and Lucius, and as the “Temple of Hercules Callaicus “, both denominations without foundation.

In the excavations carried out in different periods were found several sculptures in the sixteenth century statues of Asclepius, Hygieia and daughters connected with medical science and a statue of Minerva with the serpent (symbol of medicine), from which the present name (ALSO ‘it improper as the old ones) of the monument. At the end of the nineteenth century were found other statues (now the Capitoline Museums), including two statues of Roman magistrates about to launch the map, that is, the act which initiated the chariot races in the Circus.

The building dates back to the fourth century AD, it looks like a big construction from the plant decagona, originally covered by a dome (partially collapsed in 1828) with a diameter of about 25 meters. On each side of the decagon were nine niches, except the input that maybe it was punctuated by columns. Above the niches opened large arched windows which had the dual function of providing the light and lighten the mass of the building. Ten pillars provided support for the dome, which, starting from a polygonal shape, gradually assumed a hemispherical aspect. Probably the structure had to have stability problems if they were placed outside the buttresses to support the walls. The monument has now only the brick walls, in which no original marble covering, while the dome was decorated with glass paste mosaics, still partially visible.

Today is certainly hard to believe that until a few decades ago, the building was in open countryside, but unfortunately the urbanization of the Esquiline and the construction of the nearby railroad, which both took place at the end of the nineteenth century, contributed to devalue both the importance both the beauty of the monument.