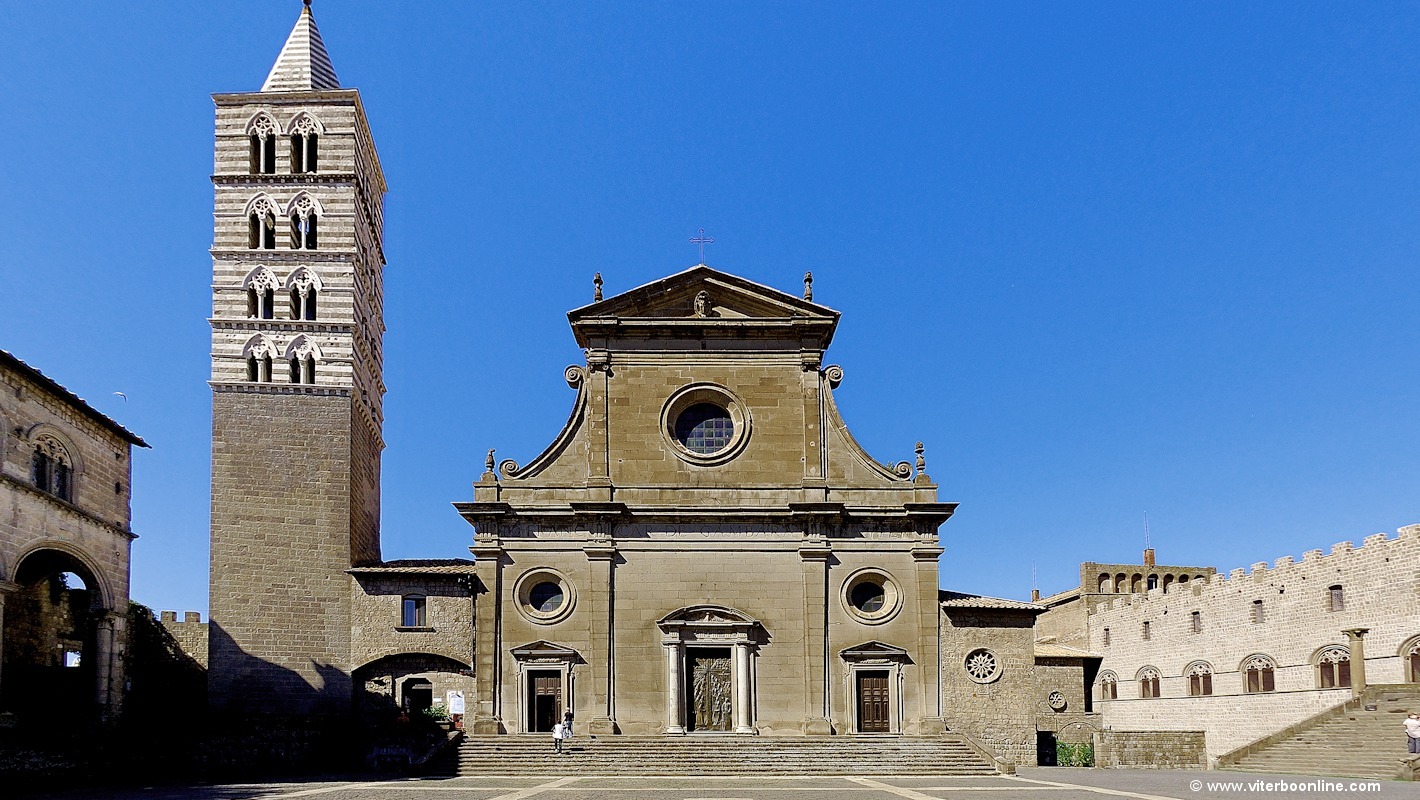 The Cathedral of San Lorenzo is the main place of worship in the city of Viterbo, a bishopric of the diocese of the same name.

The church has an impressive Romanesque structure dating from the twelfth century, although the facade, because of rearrangements of the sixteenth century, looks like the structure of the Renaissance style.

Two popes are buried in the Cathedral: Pope Alexander IV, who took refuge in Viterbo fearing capture by Manfredi of Sicily, whose tomb has been lost, and Pope John XXI (1210 – 1277), Whose tomb is still visible at the bottom of the left aisle. In May 2000, a special honorary grave was placed in the same cathedral, at the behest of John Paul II.

The current facade contrasts definitely the surrounding buildings, the source and medieval style, as well as not being built in stone like those, is designed in the Renaissance style, for Cardinal Gambara (1533 – 1587), bishop of the diocese of Viterbo from 1568-1580, which gave over to the transformation of the cathedral. From the outside the only original work visible is the bell tower, formed in the upper layers marked by double lancet windows and polychrome horizontal bands alternating the white travertine of the local and the blue basalt. Access to the portal is via a short staircase.

The interior, with three naves separated by two rows of columns connected by arches and with a floor cosmatesco, was remodeled in the sixteenth century, when they were open in the side walls ten chapels: this resulted in the loss of the frescoes painted on the wall walls, demolished to make way for chapels themselves. In the seventeenth century it was built a barrel vault decorated in 1681 by Urban Romanelli which prevented the view of the decorated truss currently visible. In the same building phase is due lengthening of the nave and the apse baroque building (currently hidden from the reconstruction of a modern apse in place of the Romanesque) visited, along with the beautiful vestry and the Palace of the Popes, speaking at the Museum the Colle del Duomo in Viterbo. Most of these changes was then removed after the Second World War: the explosion of a bomb exploding in the cathedral during a bombing raid in 1944, in fact, produced extensive damage and subsequent restoration provided an opportunity to bring much of the interior the Romanesque church at estimated. Eight of the ten chapels were so walled together with the apse.

The cathedral contains some artistic works of painting and sculpture: