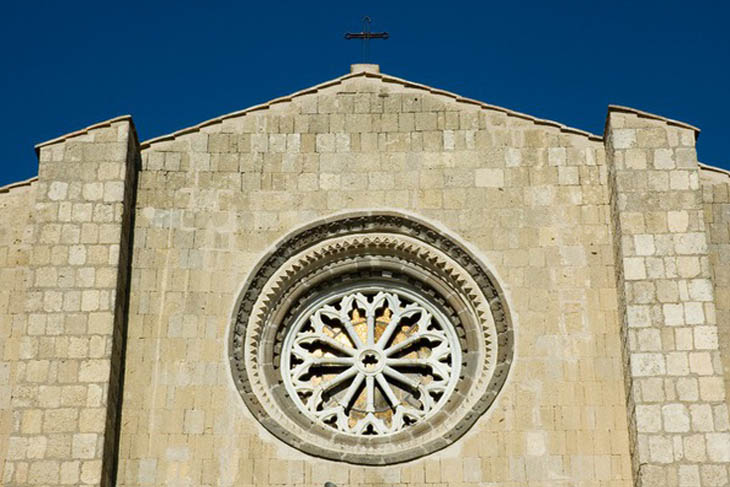 The history of the foundation of the sanctuary contains some decidedly peculiar Tarquinia.

His erection is in fact due to the Servants of the Blessed Mary, Mother of Christ in Marseille, a lay congregation included among the monastic orders of the Fourth Lateran Council in 1257 and intended to ‘extinction by a constitution of the Council of Lyons in 1274 11.

In the short span of two decades were a number of their foundations in several European countries and in Italy, one in Viterbo (1265) in addition to Tarquinia (1268), both with the same titration. Reason for this success is the particular function of each Served Marseille fighters against the Cathar heresy, very widespread in the Viterbo area. Central moment of their preaching was the salvific function of the Virgin Mary as the mother of God

And an ancient and precious painting of the thirteenth century with the image of Madonna and Child Blessing Odigitria-and-a sincere Marian devotion are the most conspicuous legacy that the ephemeral French order has left the Church of Tarquinia.

The cult of the statue of the Virgin becomes the foundation of the future sanctuary and resists all the vicissitudes and hardships they see the foundation go first to the Benedictines of Sassovivo then, towards the end of the fifteenth century, under the patronage of the community, for the memory of miraculous deliverance from the plague of Tarquinia, consolidated the sacred space as a bulwark spiritual, transforming it into a sanctuary full house against pestem. This pier is still enshrined in the complex ritual-religious civic celebration that involves the city magistrates, the entire community and, basically, the “lords of the party”, ie the priors of the arts of rural peasants, casenghi and cowherds.