All news, events and special Jubilee
You are here: Home \ routes to Rome \ Rome Egyptian: between Pyramids and Temples
routes to Rome
0

Rome Egyptian: between Pyramids and Temples 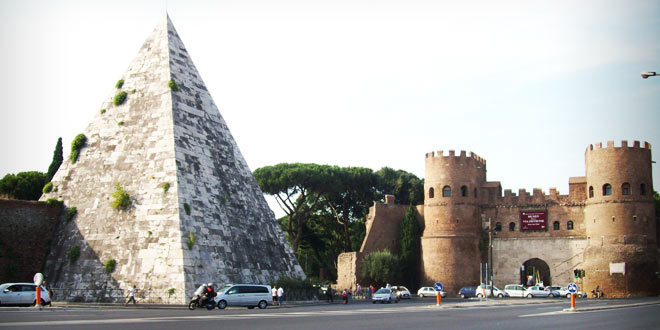 Following the conquest of land by the Egyptian Emperor Julius Caesar, Rome knows the great civilizations of the Middle East and, to date, there are numerous examples of Roma in Egyptian cities.

The tomb of a rich politician, entirely covered in Carrara marble. Other pyramids stood in the zone occupied by the Church of Santa Maria dei Miracoli in Piazza del Popolo, another was at the beginning of Via della Conciliazione, the gates of the Vatican but was demolished in 1499.

They, along with the time and saccelli, still testify to the relationship between Rome and the Egyptian civilization. In reality, however, the numerous temples dedicated to the gods Isis and Serapis especially now remains not much.

BETWEEN TIMES AND EGYPTIAN STATUE

Both on the Aventine Hill that the slopes of the Colle del Quirinale are still the remains of the temple dedicated to Serapis. Instead between Via Labicana and the Colosseum you can see the remains of the square Isis, set among twentieth-century palaces.

Testimonials of Rome Egyptian are also scattered in different parts of the old town and especially take on different forms. So you can count the lions at the foot of the steps of the Capitol, as the cat walled in Via della Gatta at Palazzo Grazioli, the Statue of the Nile in the Vatican, the statue of the Foot Marble located in the street, the statue depicts Isis herself, placed in Piazza San Marco.