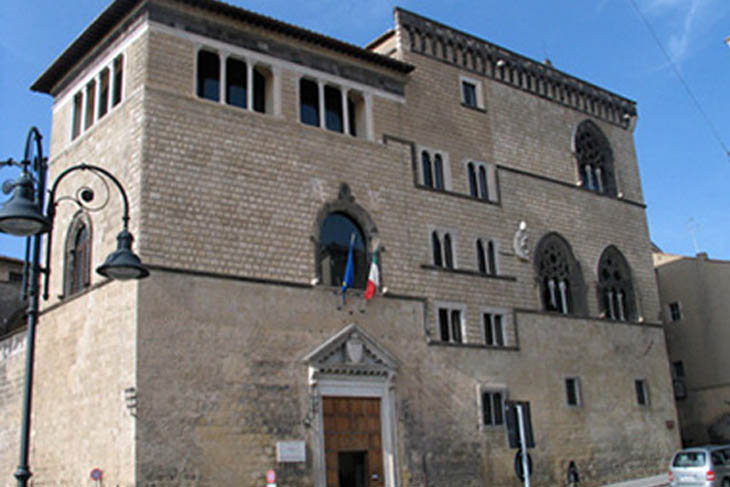 The town center is dominated by the Palace, a splendid building of Gothic-Renaissance raised, by Cardinal Giovanni Vitelleschi in 1436-39 and completed in 1460-90. The building, which was built on the front and it is possible that it is not two periods, as many think, but only one, and that the stylistic differences of the facade are due to changes in artistic direction or periods of transition between different architectural addresses. The palace, passed after the death of the Cardinal to the Apostolic Chamber, was inhabited by various popes such as Leo X. At the end of the century. XVI will work accomplished Cardinal d’Angennes de Rambouillet, who stayed as governor of Sixtus V, then passed to Soderini, and finally, in 1900, who sold it to the City to the State because there was host to the National Etruscan Museum. Badly damaged by a bomb January 17, 1944 it was reported by the restoration lines originali.La noble facade, to draft in relief at the top, consists of three buildings, one on d. and median of Gothic-Renaissance sin., slightly lower than the Renaissance style. The embellishes a Renaissance portal surmounted by a triangular pediment, supported by corbels and decorated with fine finesse, enclosing the arms of Vitelleschi, this opens a large, ornate arched window, and upward lengthens the architrave loggia. In the middle stand three rows of double lancet windows, corresponding to the tower and climb to the d. three elegant Gothic windows, running up a round of buttresses that continues on the side d., where it is also a beautiful ogival mullioned window (into the tiny space is a well-curb, 1460, formerly in the Town Hall, with figures of saints tarquiniensi, and a female statue in bronze of Emilio Greek), always on the side d., visible from the square Soderini, are on the first floor, Renaissance windows on the second, three lancet windows surmounted dall’absidiola roof of the chapel of the palace. The right side., Who top the architrave loggia as the facade, continues with a high wall, then with the oldest part of the building, open at the bottom by two Romanesque arches divided by a low column, and the truncated tower Fani, partially remodeled in the Renaissance (left., on an upper floor of the square is the monument to Giuseppe Mazzini).