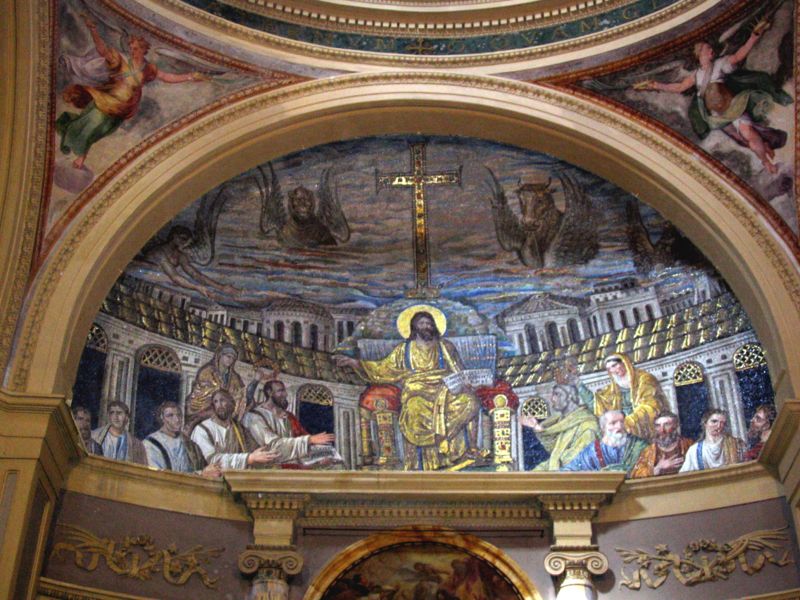 Not far from St. Praxedes, is dedicated to her sister, and stands on the site of the domus owned by Senator Pudens, along the Vicus Patricius, now Via Urbana, that already from the name denoted the presence of residences. The area of the church is full of remnants of Roman, partly underground, partly incorporated in the building, and the ruins of this century have established the presence of a two-story house on top of which was built in the third century a thermal building, building at the end of the fourth century, under Pope Siricius (384-399), was transformed into the present church.

The church was restored in the eighth and in ‘XI century, but above all, between 1585 and 1599, was made a general restructuring in the work of Francesco da Volterra, while recent reconstruction of the facade and the provision of access via Urbana, dating back to 1870. Additional recoveries were made in our century. Currently the church is as deeply sunken above street level, which indicates the elevation of the land, especially in these areas more steep, since late antiquity to the present. On the left of the façade, the beautiful bell five orders, dating back to the thirteenth century. The facade. as entablature of the central portal, one of the finest medieval reliefs of Rome, with a floral frieze and medallions in qua1i are inserted figures and Agnus dei SS Praxedes, Shepherd, and Pudens Pudenziana. dated to around 1080. The interior was originally three naves, divided by six columns on each side, which soon were enclosed within the pillars; the restoration of 1588 has transformed the church nave, getting chapels in the aisles, and recovering partially in light columns. The restoration of 1930 have peeling walls and floor to bring to light traces of the original walls of the classroom as well as the spa of the mosaic floor of this. In the right aisle, access to the sacristy, which in turn is a fresco depicting the Conversion of St. William d ‘Aquitaine. by Domenichino (1625).

The apse still retains the superb mosaic of the late fourth century, depicting Christ on the throne, surrounded by the apostles and by the SS. Praxedes and Pudenziana, with the background depiction of Jerusalem, and at the top the symbols of the evangelists; restored the edge following the renovations sixteenth, still retains a great majesty and an air that comes from its highly classic dating very old. At the end of the aisle can be accessed Mariano oratory, which faces behind the apse of the church, on the back via Cesare Balbo, who is completely frescoed with a cycle of paintings dating from the pontificate of Gregory VII (1073-1085) . slightly earlier and similar to those of the lower basilica of St. Clement. Once back in the church, in the left aisle, there is the chapel Caetani, which stands on the site of the oratory of S. Shepherd, believed to be the first church established in the domus of Pudens. The chapel is a beautiful late sixteenth construction, begun by Francesco da Volterra and completed by Carlo Maderno, rich in marble, stucco, mosaics, tombs, etc. Also on the left aisle, the tomb of Cardinal Luciano Bonaparte, nephew of Napoleon, who promoted the restoration of 1870 (1895). In the basement of the church are the remains of the Roman house upon which was built the spa building. On the back of the church, which overlooks the oratory Mariano, passes via Cesare Balbo, traced in recent times, and dominated by the massive wall that supports the Interior Ministry and the Ministry of the Interior, with the pleasant terraced houses beginning of this century .