Church of Santa Maria Oration, an example of Bernini school in Civitavecchia 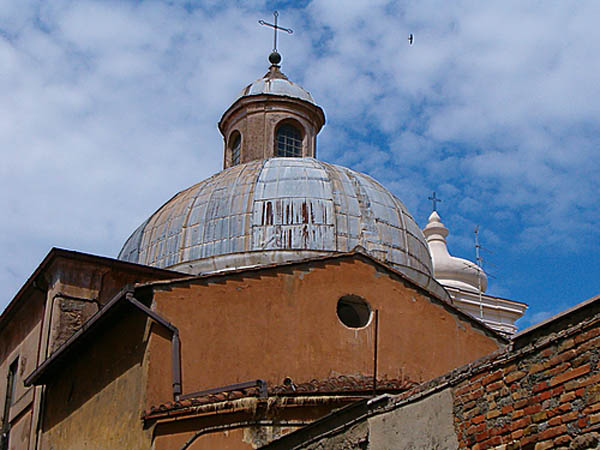 In the second half of the 600, for the increased number of Brothers and also to the difficulties in the relationship with the same PP. Dominicans the Brothers decided to build its own space. The site referenced in this testimony, owned by Michelangelo Bonauguri was located in Piazza Leandra. This has given you some confirmation as a map of the city dating from between 1670 and 1680 indicates in the above square, beside the furnace chamber, a church called “St. Joseph Oratory of Death.” The idea of building the church was born in 1685, but only in 1693, purchased from the Reverend Apostolic Chamber began the construction of the wall that ended in 1699.

The name of the designer is uncertain in some indicate Mattia de Rossi author of the project, other Carlo Fontana, however, both of Bernini school. However, it is uncertain whether the name of the designer is pretty sure the name of the director of works that Col. Julius Cerutti, at the time head of the fortifications of the port by the Apostolic Camera. The Church has a structural system typical of the Baroque churches of the second half of the seventeenth century. It ‘a central plan with a Greek cross, large elliptical room on the end there are three chapels:

THE CHAPEL OF THE SS. CROSS;

There are then four wickets in the corner, with the above symbol of the Brotherhood (ni), leading respectively:

THE CHAPEL GULGIELMI (time dedicated to Our Lady of the Seven Sorrows).

The interior decoration in stucco were executed by Roman artists between 1699 and 1703, on commission of a benefactor of the Brotherhood that Francis PUCCITTA.

The floor of the hall, elliptical, originally cooked slabs of marble was rebuilt in 1867.

Providing the initial project only the stucco in the second half of the 700 it was thought the decorations starting right from the dome in which the painter Joseph Trapanese Errante wanted to represent in Baroque style between 1786 and 1788 The APOTHEOSIS OF OUR LADY OF SUFFRAGE.

Under the drum of the dome includes 4 oval by an unknown author that represent biblical figures from the Old Testament, namely:

2. THE QUEEN ESTHER IN THE ACT TO INDICATE AMAN, DID KILL WITH HANGING BY ORDER OF King Ahasuerus

3. SAMSON THE JAW OF ASS AFTER THE VICTORY against the Philistines;

4. DAVID THAT KILLS THE MIGHTY GOLIATH.

The four characters find their rightful place in this Church because they represent the POWER OF GOD INVOLVED IN FOR THE POOR AND OPPRESSED, AND IS TO INDICATE THE VICTORY OF GOD FOR MALE AND DEATH.

Before moving on to the paintings let us reflect for a moment on two important sculptures.

In the Chapel of the Crucifix, from which it takes its name, a beautiful wooden statue of the seventeenth century by an unknown author. This statue despite its size and weight, was carried in procession through the streets of the city in 1855, during a severe epidemic of Asiatic cholera.

The other sculpture always a wooden statue of the seventeenth century, by an unknown artist depicts the RISEN CHRIST. The feature of this statue beyond the legend that concerns him is the bill. It is not a single piece of wood but many of wedges wedged between them, over which was spread a thin layer of kaolin.

The altar piece is an oil on canvas of 1700 and is the MADONNA OF WORSHIP AND SUFFRAGE, the author is unknown even if someone gives wanderer.

Inside the Chapel of St Michael is placed the blade SAINT MICHAEL, appearing to Saint Gregory the Great and Rocco, this oil and an unknown author.

The other blade that gives the name to the chapel is SAINTS BENEDICT AND ANNA, always oil on canvas by an unknown author.

Inside the Chapel of St. Michael in the curvilinear tympanum is set with a medallion, oil painting depicting the MADONNA AND CHILD, restored in 1970, and almost certainly due to the wanderer.

In the entrance hall, the choir above the parapet obtained from the stern of a papal prison (these are most likely the St. Peter’s namesake flagship of the fleet in the Battle of Lepanto pontificating). It was set into place in the early 1800s, as evidenced by the coat of arms of Pope Pius VII (1800-1823).