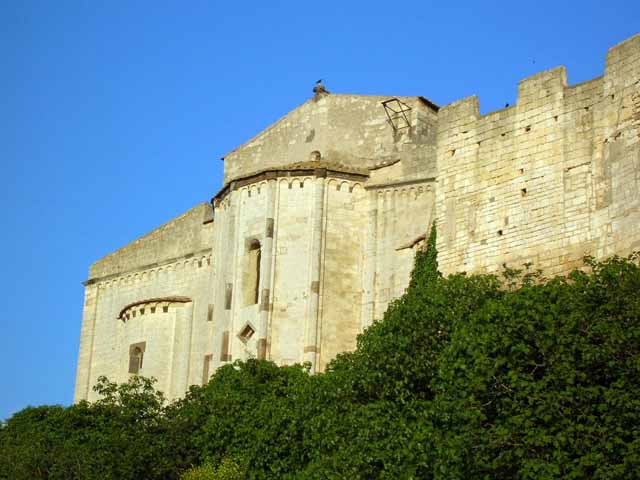 The church of Santa Maria is the most important medieval monument of Tarquinia. It stands on a spur at the western end of the cliff of Tarquinia, at the point where there was the castrum Corgnetum, the original nucleus of the medieval Corneto. Begun in 1121, the building was consecrated only in 1207 and in the following years was completed the interior design that allowed them to use.

The church has a façade, oriented to the east, overlooking an open space outside the city defenses built by Albornoz in the fourteenth century. At his side is a high noble tower.

The facade, originally perhaps tripartite took the crown in the Late Period horizontal while in the eighteenth century was added the belfry.

The portal is dated work of Peter Ranuccio (1143). Information is supplied by the message that there is:
“RANUCII PETRUS lapidum NOT DOGMATE Merus ISTUD OPUS FECIT OPTIME”

The jambs and the archway is decorated with discs and circles connected by bands that still harbor the decoration cosmatesca.

On the inside of the door jambs are the columns with composite capitellini continue with a circular molding around the bezel that perhaps originally contained a mosaic.

Two portals simplest open the sides of the main entrance, divided from it by two pilasters that were part of the original facade.
The tuff here takes the place of the marble.

The original facade also belong to the two series of arches, constructed by inserting triangles in darker lava stone (the nenfro) with which they are derived for the corbels. Crude decorations are placed in the concavity.

The side of the church is marked by heavy pilasters between which there are a series of mullioned windows. At a later stage (corresponding to the creation of the vaults and the dome) was the wall of the nave, which is open from multiple large windows and the height of the dome, two rosettes.

The simple straight shoulders windows to have a single rincasso assumes that in some cases a profile molded.

The eaves fascia incorporates the decorative themes of the arches of the facade enriching the repertoire.

At the center of the nave is the surviving section, and much altered, the dome that originally had a band of blind arches and was surmounted by a lantern.
It is an original architectural solution which, associated ideal axis defined by the two rosettes, merges the conception of the nave basilical with the central plant-derived Byzantine.

Overlooking the cliff you can see the apses, the central one, polygonal edges highlighted by half, has an oculus diamond below the window. It is a decorative element of Pisan origin.

The interior has three naves can quite easily identify the three phases of construction that affected the construction of the building.

The first phase (1121-1143 approximately) corresponds to the walls to the level of the longitudinal arches. It is known in fact as part of the composite pillars we have the components to the nave is crashing to a halt without any structural function.

In the second phase (1143-1168) was completed interior design, now very fragmented, and were ribbed vaults of the aisles.

At the end of the twelfth century is dated the construction of the dome with the opening of two rosettes and the reconstruction side of the apse.

The southern rosette is open five ports placed round cloverleaf, below a beautiful relief depicting a man’s face.

The rose is the opposite-ray and is bordered by a frame of leaves hooked; eagle in the center.
The cylinder apse is divided by half continuing into the basin as toroidal elements.

The capitals are carved into blocks of nenfro he represent a clear break with the wall of the nave and can be traced back to the first phase of construction.

The pads are coarse and depict subjects largely imaginary animals on the capitals of the pillars and columns prevail in those of the subject plant.

Only rarely appear human figures among animals or vegetation.

One of the most interesting types is a “basket of snakes” that appears on a couple of occasions.
The capitals of the semi are mostly leafy type.

It seems sometimes even the type cushion with rounded corners and …
Capitals … i have a simple decoration with classical motifs and moldings.