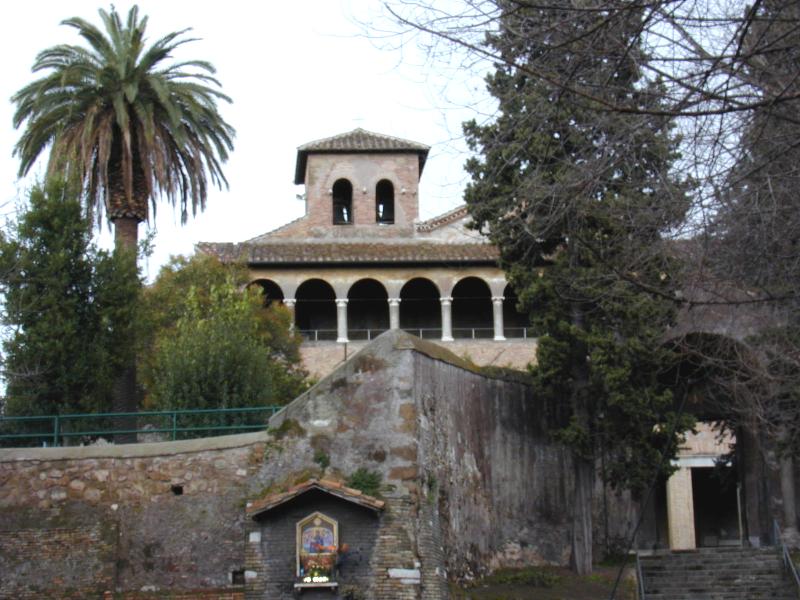 San Saba is one of the churches of Rome, built on the “small Aventino” (between Aventino and Celio, now Piazza Gian Lorenzo Bernini) and dedicated, precisely, to St. Saba.

As the photos show the time, even at the beginning of ’900, the church and monastery of San Saba were in the countryside. The first plan of Rome (1909), among others, produced in 1921 the new class neighborhoods of San Saba and Testaccio, the last two within the walls, separated from the territory of Ripa.

The church was built in the parish December 5, 1931 with the bubble Incolarum number of Pope Pius XI.

The Basilica of San Saba is named after the monastery and its church that were for centuries, after the fall of the Western Roman Empire, the only presence of the inhabited area. The tradition connects them to St. Gregory the Great and his mother Silvia saint, who would stay there in the sixth century. Ascertained however, is the presence of some hermits who, in the seventh century, would settle on the ruins of what was probably the barracks (statio) of the IV cohort brigade, conveniently located in a place from which one could dominate with his eyes large part of the territory to the southeast of the city, between the current Porta San Paolo and Porta San Sebastiano. It was Eastern monks, coming from the community founded in Jerusalem by St. Saba and fleeing Palestine troubled by wars, massacres and the expansion Islamic taken possession of the site, you established a monastery that quickly gained fame and prestige.

Between the eighth and ninth century San Saba was considered the most important monastery in Rome, especially because in those centuries the popes made it the center of irradiation of a vibrant diplomatic activity towards Constantinople and the barbarian world entrusting its egumeni and abbots important assignments embassy and trading. Church and monastery received so a rich set of furniture, a large decoration precious frescoes (many today removed for conservation purposes) and, later, real estates such as, among others, the castle of Marino (1253) and Castle Palo (1330).

Around the tenth century the community sabaitica, shrinking, was replaced by the Benedictines of Monte Cassino and, in 1144, from Cluny who introduced the reform of the monasteries. The twelfth or thirteenth century dates the reconstruction of the church in its present form, elevated from the previous (now in the basement, closed to the public) and much wider. New architectural interventions succeeded in the fifteenth, sixteenth and eighteenth century, while the government of the religious complex was given prior to the Cistercians (1503) and, since 1573, the German College Hungarian Empire ruled by the Jesuits, who have still the direction.
The disharmonious superfluous that conceals the original facade of the basilica of San Saba.

The medieval architecture of the church have been at least partially restored during the restoration of 1900-1901 and 1943, although the original facade is still covered by a disharmonious building with porch century (whose graceless pillars replaced the original columns), piano top with rectangular windows (instead of the old mullioned windows) and loggia end of the fifteenth century.