The remains of the Baths of Trajan 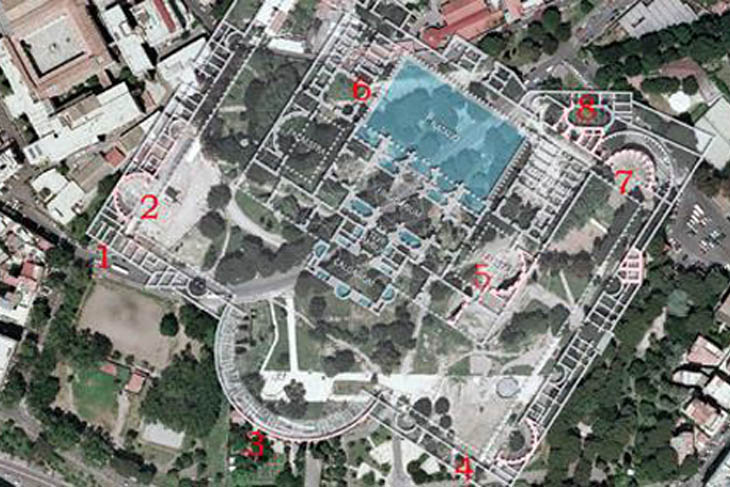 Located on top of the Colle Oppio, the third Augustan region, baths were built, as recalled by the ancient literary sources, designed by the most famous architect, Apollodorus of Damascus and dedicated by Trajan in 109 AD

On June 22, 109 AD, as evidenced by the Fasti Ostiensi, Emperor Trajan inaugurated and opened to the public the great thermal plant he had built on the southern slope of the hill Opium. The complex covered an area of about 60,000 square meters over other environments, partly pre-existing (as the pavilion esquilino the Domus Aurea, or the building of the fresco of the “Painted City”), in part specially built, with the function of underground service and the connection between the various parts of the baths.

The design of the spa, due to Apollodorus of Damascus, it appeared certainly innovative compared to what until then known, with the characteristic of a large green area, free of buildings enclosed in a fenced porch that surrounded on three sides of the body central building with the rooms used to swimming and body care. The orientation of an axis North-East / South-West, North-South different from that of the previous structures, was probably influenced by the desire to seek the best position relative to the sun and the winds, so as to ensure a warm greater and longer exposure to the sun’s heat. The plan can be reconstructed, as well as on the basis of Renaissance drawings and the similarity with the other great Roman baths, studying the monumental remains still exist today in the park, created in 1936; are also preserved fragments of the Forma Urbis, the great marble plan of the early third century AD, which represent a part.

Various inputs allowed to enter the compound spa on all sides; monumental entrance to the Northeast was accessible to all the bathrooms, which began from natatio, the large pool of cold water, which was followed, on the same axis, the great central frigidarium and then rooms for warm baths and hot ( tepidarium and caldarium); on the sides of this axis were the locker rooms and gyms. Of the central few structures remain today: the exedra of the gym and the eastern side of the apse of a classroom of the south side; nearby, part of the walls embedded in a small building, former hunting lodge of Brancaccio.

The external enclosure are still visible today the grand central hemicycle of the south side, which is still perfectly preserved the lower level (where visible today is the entrance of the Domus Aurea), and exedras Southwest and part of the South- East, traditionally identified with two libraries: the Roman concept of the use of the spa provided in addition to the fact real bath also sports, leisure and culture. Remains exedra Northeast are visible on the northern edge of the park, almost opposite to the Sette Sale, name by which it is known the great reservoir of water that ensured the supply of the Baths.