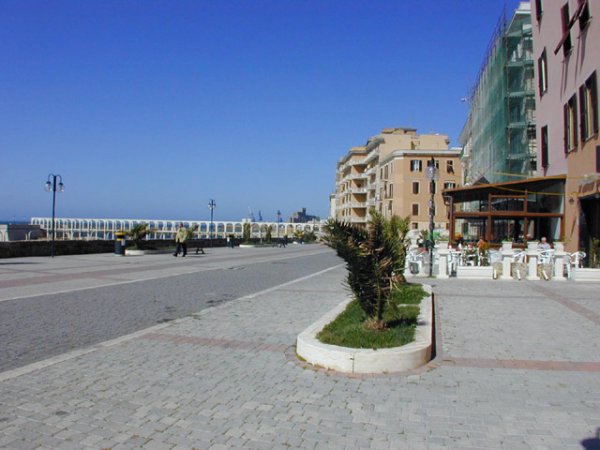 The historic waterfront is the central stretch of Viale Garibaldi and, continuing south along the Viale Thaon de Revel from the stretch of Pyrgos. In recent years, the waterfront has been affected by redevelopment works that have expanded the pedestrian area, arrangements which, giving birth to the area known as La Marina.

Along the Avenue Thaon de Revel, you can along the pedestrian area of the beach of Pyrgos, surrounded by the massive town Frenchmen; This bathhouse was used at the end of the last century by the elegant Roman elite, born from the merger of two neighboring establishments: the “Bruzzesi” and “Clerks, it appeared as a small island which was accessed through elegant jetties, bridges and roundabouts wood, in the area overlooking the restaurant “Cecco” stood the hot baths that were fed by the waters of the sea, heated to allow treatment of joint diseases. the plant was divided into two areas: an area reserved for men and women. it remains memories i1 a violent storm of 2 May 1902, which caused damage to Pirgo such damages, so much so that it seemed that there was nothing more to do for this stylish beach but, after renovations and reconstructions, resources “more beautiful and majestic ere” .

He lived a long and exciting season until 1941, when another violent storm put him definitely on his knees.

After the war continued to be the favorite beach civitavecchiesi, until the plant was closed. In recent years the Pirgo was fully recovered and has become a wonderful place where you can sunbathe, walk, jog or spend quiet and cool evenings in the “small bars” outdoors.