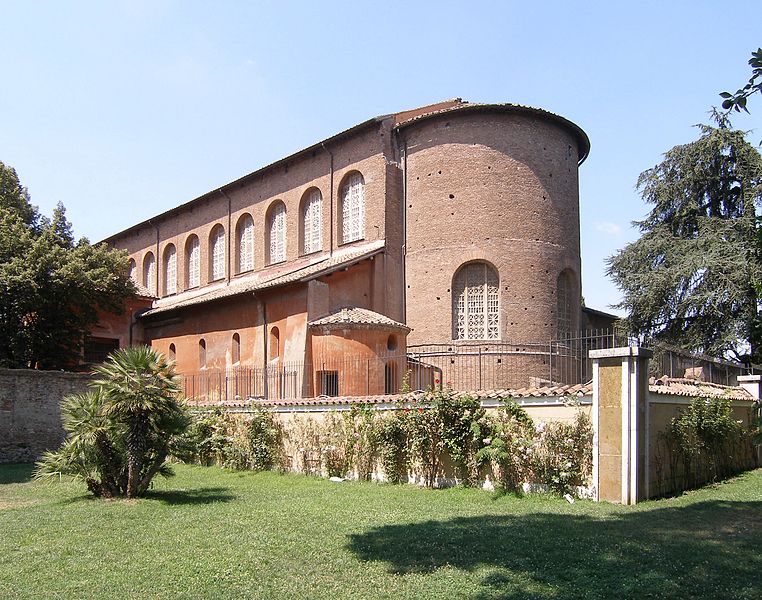 The basilica Santa Sabina is a Catholic place of worship of the historic center of Rome, located on the Aventine Hill, in the territory of the District XII Ripa.

Built in the fifth century on the tomb of Santa Sabina, as well as one of the best preserved early Christian churches ever, although heavily restored, is the seat of the General Curia of the Order of Preachers. It is one of the minor basilicas of Rome and on it insists the eponymous title of cardinal.
The church has no facade: it is embedded in the atrium which follows the plan of the ancient narthex, one of the four arms of the ancient portico, currently in the Dominican monastery. You enter the church through a portal, preceded by a small porch with three arches, located on the right side.

Typical of early Christian architecture, as well as externally smooth walls (without buttresses because the coverage was always truss, then a non-pushing), was the presence of large open windows in the clerestory (the highest part of the nave). In later centuries, when it lost the ability to do large windows, the openings in the churches were reduced drastically in fact. Remain traces of the early Christian church tower in the base of the bell tower baroque, located to the left of the church façade. The monastery has a quadrangular cloister with galleries on all four sides that open toward the center with mullioned supported by marble columns.

Inside the church is clearly a basilica with three naves, divided by columns from an ancient monument late imperial, probably never put in place, and large semicircular apse at the nave. Reconstructions of baroque remain only the two side chapels quadrangular covered dome, dedicated to St. Hyacinth (right) and Catherine of Siena (left). The upper part of the nave, with a modern coffered ceiling (1938), was once covered with mosaics; Today, however, only the spaces between the arches are decorated with emblems in opus sectile. At the center of the nave there is the burial of ‘Munoz of Zamorra built in the 1300s and, unlike the other tombstones in the basilica, decorated, in some parts, mosaic.

Near the presbytery there is the Schola Cantorum, rebuilt in 1936 on the inspiration of the original early Christian, even reusing the remains of the ancient parapets. The apse, crowned by a triumphal arch with images of several saints, was also decorated with mosaics and, in the apse, there is a fresco of 1560 by Taddeo Zuccari depicting Jesus, the Apostles and Saints buried in the Basilica. The high altar, placed on a raised floor, is characterized by a frontal red porphyry.